How You Manifest Anything, with Your Brain

Look up any instructional guide or tip sheet on how to manifest things – and you’ll find a to do list made up of items that come down to ‘believing it will happen’. Do this, do that, believe it will come to you/happen/be created. Of course they break it down and dress it up in different ways, like this list below from HuffPo:

1. Get clear on what you want.
2. Ask the universe for it.
3. Take action (help the universe make it happen).
4. Trust the process.
5. Acknowledge what is being sent to you along the way.
6. Increase your vibration.
7. Clear all resistance.

While these are all nice – they don’t get to the heart of what you’re actually trying to accomplish by doing those actions. How are these tasks supposed to manifest anything? What’s the point? Does all your energy just go out there into the magic air and somehow come back with what you’re asking for? Kind of yes, partly no, but it’s more than that.

It’s not all wishing and hoping and praying. I get vomity just thinking about sitting in a room of good thoughts and ‘positive vibes’. My snarky, hurt, insecure self crawls out and tells me that this stuff is all dumb while at the same time hoping it’s real.

I always wanted someone to explain to me how all this ‘positive thinking’ actually works. Not just in the usual think good thoughts, and you make your reality, and putting it out in the universe and it’ll come back, or karma something. That was never clear enough for me. While I understand that we cannot explain everything about many things – I needed to be able to explain to myself, how manifesting actually works. Not on a scientific level, but at least a more rational process driven level for my monkey brain.

I’m not entirely sure that I didn’t dream this up, but I remember being in a sales presentation where a middle aged Asian woman presented the below diagram. 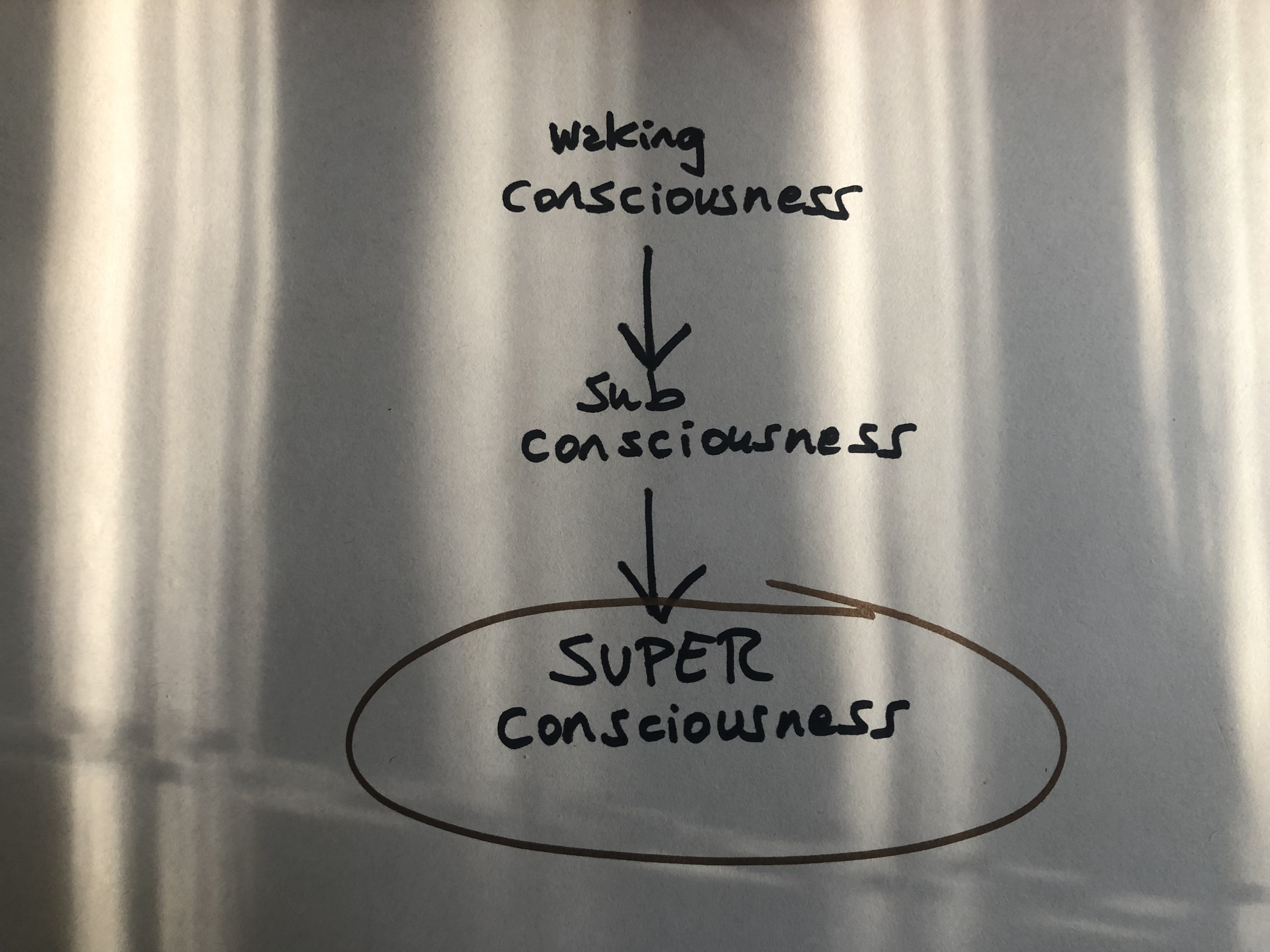 Like a tiny baby sleep floating deeeeeeeep inside your brain and anything it believes gets popped into existence. Allllllll the things we do – all the tips, tactics, and methods of manifesting are just to get that tiny baby to hear it and believe it so that they’ll make it happen. That’s it. That’s everything to manifesting and creating your reality. Getting that part of you that makes and shapes reality, to believe whatever you want it to believe.

Going back to that first list up top, you can see how everything is designed to simply help YOU believe in what you’re wanting. They’re all steps to sending that message down to your deeper super consciousness so that it’ll flip the switch and make it happen.

1. Get clear on what you want.
2. Ask the universe for it.
3. Take action (help the universe make it happen).
4. Trust the process.
5. Acknowledge what is being sent to you along the way.
6. Increase your vibration.
7. Clear all resistance.

Everything else we do are tactics and steps toward reaching that goal of getting that tiny reality creating baby in your head, to think what you want it to think. This is where all that negative thinking and positive thinking come into play. All that talk of whether you think you can do it, or you can’t – you’re right – is made real.

Vision boards. Tarot cards. Spells and rituals and ceremonies. Journals. Putting it out there into the Universe. Praying to God. Clearing resistance. Clearing past traumas. All of them are tools and tactics and things we do to get the messages we want, down to our super consciousness.

This isn’t an easy task – but it’s easier and easier for different people. This also isn’t a hard and concrete rule of law. The law of attraction isn’t a solid, unchangeable law. No laws are. The laws of physics change depending on the situation and other forces in action. So does your reality and your ability to create/change your reality.

Just because something you were trying to manifest doesn’t happen for you – doesn’t mean that it didn’t happen for you in a different multiverse. I know – not to get all Infinity War: Endgame or quantum physical on you – but there are many, many factors that affect the outcomes that your super consciousness is creating. The mashup of your reality with allllll the other realities from other people, other beings, and other multiverses weaving in and out of each other is beyond any box I can put them in. However – sending those messages, believing, and working towards manifesting is the single most effective thing we can do when we’re trying to create and change our own lives.

What should you do in order to manifest what you want? All the things you can. You’re trying to convince the most unconvinceable person you know – yourself.