Jonah is almost 14 months old, and even though he’s not all-out walking on his own yet, I think it’s safe to say we have entered Toddlerhood. He does toddle. AND he can throw some impressive tantrums, which is one thing most people associate with the toddler stage. Don’t get me wrong, my sweet boy is remarkably chill and full of kindness and giggles and love… 90% of the time. But he has learned that a.) he is his own person, b.) he has preferences and wants, and c.) he cannot always DO everything he wants to do, either because of physical limitations or because we won’t allow it. And when he can’t get his way, he is not shy about letting us know how he feels. He falls to the ground, face down, stretched-out, classic tantrum-pose, kicking and screaming. Well, wailing. He’s not much a screamer, thankfully, but he definitely can cry. 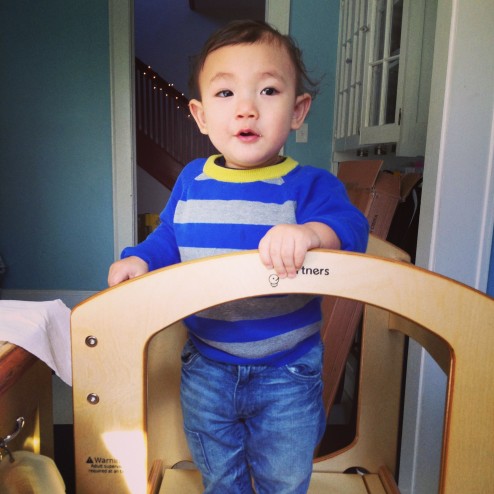 So I’ve been thinking a lot about tantrums. Obviously, I don’t like to see my child upset. I also understand that we are past the baby stage where  crying means he has an unmet NEED. Now he cries when he has an unmet WANT. He WANTS to pull the cat’s tail. He WANTS to climb up the bookshelf. And he will throw a tantrum if I don’t let him. And you know what? That’s fine! It’s more than fine – it’s absolutely developmentally appropriate. He is having a Very Big Feeling and he does not yet have the tools to process those big feelings in a mature way. 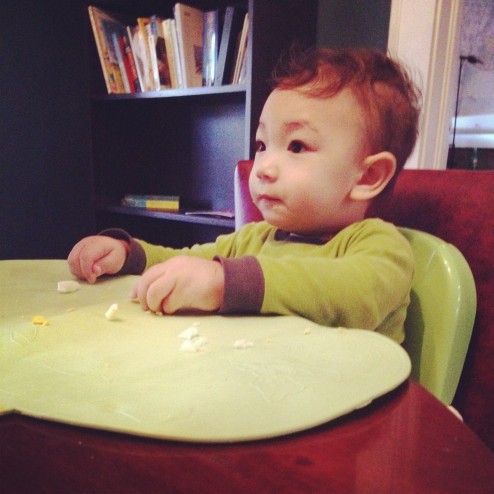 Mark commented the other day that Jonah acts like it is the end of the world – for about 30 seconds. That’s how Jonah feels. From our adult point of view, it seems ridiculous to get so upset about not being able to play with a knife or attack the cat. But for a not-even-2-year-old, there’s this thing they want to do, and they can’t do it, and it’s the only thing they want in that moment, and it feels hugely upsetting when they don’t get their way. (Luckily, we are still in the stage where the tantrum does not last long at all.) We let him express his feelings. And then we get back to playing. I’m not a fan of distracting him – “Here, look at this toy!” I wait until he is done kicking and crying and then when HE is ready, we cuddle or look at a book or find a toy.

This wasn’t easy for me. When Jonah first started having these tantrums, I hated it. I hated seeing him so upset and my urge was to STOP IT. STOP THE BAD FEELINGS. Mommy will make it all better! But distracting him doesn’t meet his NEEDS. He needs to get out those feelings. He will learn healthy emotional regulation in time. And crying is a built-in mechanism for reducing stress. It’s healthy for him to wail a bit, especially since he doesn’t really have other ways of communicating or even understanding those feelings right now. I don’t want to distract him from that, I want him to feel what he’s feeling. And I, as the parent, will hold the space so that he feels safe to express those less-than-pleasant emotions, and I will be there to comfort him when he needs it and in time he will learn other ways to deal with Very Big Feelings. I will also continue setting consistent boundaries, even though it causes tantrums right now. In time, he will also learn the “house rules” so to speak. He will learn that we must be gentle with the cats. He will learn that he cannot bite people. And he will learn that just because he throws a tantrum, it doesn’t mean he gets his way. He will learn all of this in a loving, respectful way. That’s my commitment to him. Even when I’m frustrated, or in pain (yes, actual pain – biting HURTS), or tired of re-enforcing the same boundary over and over and over, or I just really don’t want to deal with another tantrum… I have to keep my cool and treat my son with respect. Is it easy? Nope! Is it fun? Not usually. But it’s how I believe in parenting him and it’s my job to set those boundaries and to create a safe space for his emotions. 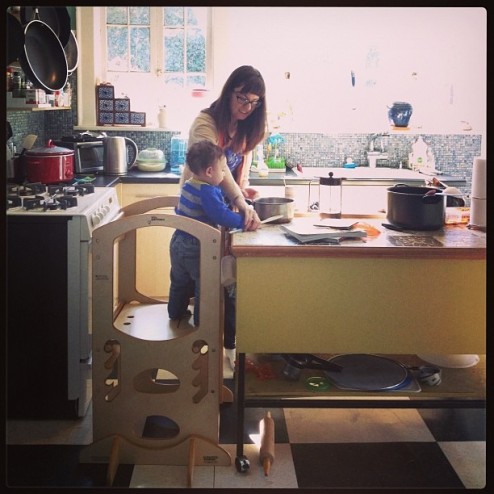 Another thing I don’t do is laugh. Sometimes it’s quite comical how textbook and how dramatic his tantrums are… and over some really trivial things. But he is having a genuine emotion, and were I to laugh at him, what message would that send? Haha, your sadness/anger/frustration is SO FUNNY. It’s especially hard not to laugh when he wails for a second, then stops and looks back to see if I am watching him. If he makes eye contact with me, he goes right back to crying. And yes, it’s very funny. But I don’t want him to think I’m laughing at him, even when the emotion he’s feeling seems less than genuine. Maybe his heart isn’t broken, but he IS upset. And even if it seems silly to me, it’s a real feeling for him. I want him to trust me with his feelings. I want him to feel respected. Each day sets the stage for the next, and when he is 15 or 21 and his heart really DOES get broken, I want him to know he can share what’s going on with me. I want him to have healthy outlets for his feelings. And if I laugh at him when he’s upset, that’s not setting a very solid foundation for us. 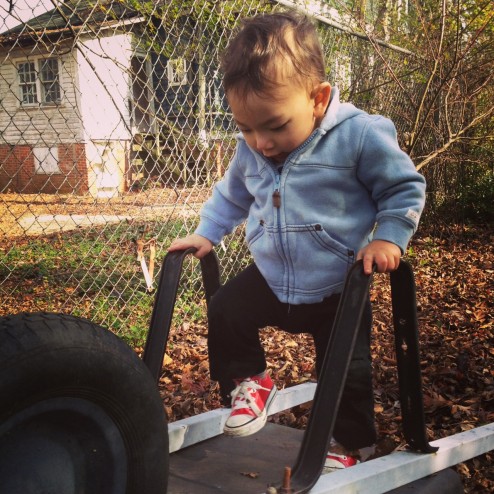 That’s how I handle tantrums, but I also try to avoid them. I know I can’t always avoid them, but I can greatly reduce their frequency in a few easy ways: food, sleep, plenty of playtime, and a YES environment. Food means regular snacks and mealtimes. I get super cranky when I’m hungry, too, so I can’t expect Jonah to skip lunch or snack and still feel 100%. He’s also way more likely to throw a tantrum when he’s tired, so I try to time my outings around his nap time, or NOT drag him to the post office on the way home when I know he’s getting sleepy. Playtime is essential – ACTIVE playtime, not just sitting on the floor building with blocks. Jonah has lots of energy and when he doesn’t get a chance to climb and tumble, he’s more likely to have a hard time getting the SLEEP he needs, and he can get more aggressive when he doesn’t get a chance to get that energy out in acceptable ways. And the YES environment is about having spaces in our home where he can freely explore/play/DO stuff without me constantly having to set boundaries, say no, redirect, or take things away. Our kitchen is pretty darn childproof, as is our living room and bathroom and, of course, his own room. We don’t keep breakable things within his reach. We have baby gates for the stairs, we’ve secured the bookshelf to the wall, we don’t have anything on the lower shelves that isn’t ok for Jonah to play with, and we don’t keep things in the lower kitchen cabinets that he can’t touch. So Jonah has nearly-free reign of most of the house, and that makes life easier for ALL of us.

For my mama friends out there who have yet to reach the tantrum stage, I hope this will be helpful! For other parents already braving the tantrums, or well beyond them, I’d love any additional tips!  Also, here are a couple websites I’ve found handy (I’ve linked to specific blog posts, but I really love many of the posts on these sites!):

One Reply to “Wednesday by Leah: Tantrum Time”