Wednesday by Leah: Nursing In Public 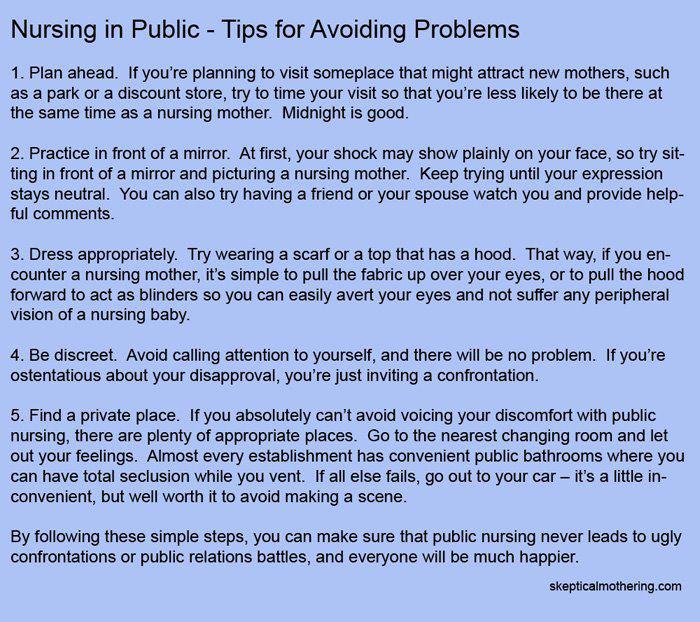 So, for those of you not up-to-date on your breastfeeding literature, this is a take on the common “Tips for Nursing in Public” that is found all over the place for new moms. It really got me thinking. I’m not super-modest overall, but when it comes to nursing in public, I’ve been inclined to keep myself well-covered. I’m painfully aware that nursing in public might (*gasp!*) make some people uncomfortable. In fact, I even used to be ever-so-slightly uncomfortable around breastfeeding women. I would quickly avert my eyes, even if the mother was using a nursing cover. Oh no! Don’t look! She has her breast out!

Well, now I’ve had my own breast out in more places than I can count. The BabyRoX is a hungry, growing little person. And Mark and I are active, going-out-in-public type people. So this leads to lots of nursing in lots of public places. And now that I’m the mom to an increasingly curious 4-month-old, the nursing cover that I so very much love isn’t quite as loved by my kidlet. And really, can you fault him for that? You try eating with something draped over your head and tell me how much you enjoy your meal. So lately, sometimes, I don’t even bother with the cover. And honestly, it’s often even more discreet than using a cover – Jonah is good about latching on quickly and then it just looks like he’s sleeping nuzzled up against me. But I spend the whole time worrying what other people might be thinking, and what if he unlatches and a tiny bit of my breast is exposed? Oh, the shock and horror! Just sign me up for Girls Gone Wild already! (In reality, I’m showing less skin than any billboard around me.)


So I’ve been thinking about this whole nursing in public embarrassment. And I’ve decided it needs to stop. At least for me. I have every right to be out and about in my community. I’m not taking my child anywhere that is inappropriate for him to be. If I were feeding him with a bottle, no one would take any issue with it.  And while I haven’t encountered any outright discouragement or harassment while nursing in public, I’ve received a lot of discouraging commentary in general around the topic of nursing in public…

“You’re going to nurse on the airplane? What about the other passengers?”

“Breastfeeding totally skeeves me out. I don’t understand why women do that in public.”

“Oh, he needs to eat? Do you need to find a restroom?”

And I’ve been letting this commentary make ME feel ashamed. Embarrassed. In the wrong… for feeding my child. For having the audacity to go to a public place with my family and keep my baby nourished and comforted. I haven’t let it STOP me from doing this… I’m stubborn enough to power on through these uncomfortable feelings. But the more I think about it, the more I realize that those feelings are a burden I shouldn’t have to carry. So I’m not going to anymore. I know that breastfeeding just needs to become more normalized in our culture… so I’m gonna help y’all out by normalizing it some more. And if you seriously have an issue with that, maybe YOU should stay home. Or go to the restroom. Or put a blanket on your head.

This isn’t just about people feeling uncomfortable, though. I was starting to write a much longer post on this topic, when I found another blog post over on Skeptical Mothering that even more articulately expresses my line of thinking…so I’m going to send y’all over there to read it! But here’s a quick snippet for the lazy/in-a-hurry types (I’m both much of the time, so I get it…):

Nursing in public is a big debate currently, but I don’t think many in the “anti” faction appreciate how big a feminist issue this is.  Acceptance of nursing in public is about female empowerment on two levels.  First, it diminishes the objectification of women.  For so long, breasts have been all about sexuality and the male gaze.  To acknowledge that they aren’t just about arousing the prurient interest of men is to elevate women beyond being mere sex objects.  Second, nursing in public is vital to allowing mothers full access to social life.  As more women are nursing, trying to do the best thing for their babies, more women will be out and about and need to nurse.  Only someone who hasn’t nursed an infant would ever say, “Just time your excursions for when the baby doesn’t need to nurse,” or “Just pump some milk and use a bottle,” or “Just sit on a public toilet for 20 minutes and nurse.”  These are not practical solutions.  What is practical is to get over our societal perversion about breasts and allow mothers full access to life outside their homes by supporting, or at least ignoring, public nursing.

I’d love to hear what Rush Limbaugh has to say on this topic. (Not.) But I will say that if any of you local mamas-to-be reading this plan on breastfeeding and feel at all uncomfortable about it, nothing helped me more than hanging out with OTHER breastfeeding mamas. I was enjoying a lovely afternoon in a park in Arizona with my friend Lindsey and we were talking about how even having just one other nursing mama around makes it so much less awkward-feeling to nurse in public. Until we feel empowered enough in our own skin to nurse our children whenever and wherever, we can borrow some of that strength from the power of numbers. So call me! I’ll come hang out with you and nurse away. And slowly it won’t be such a weird or uncomfortable thing to do. 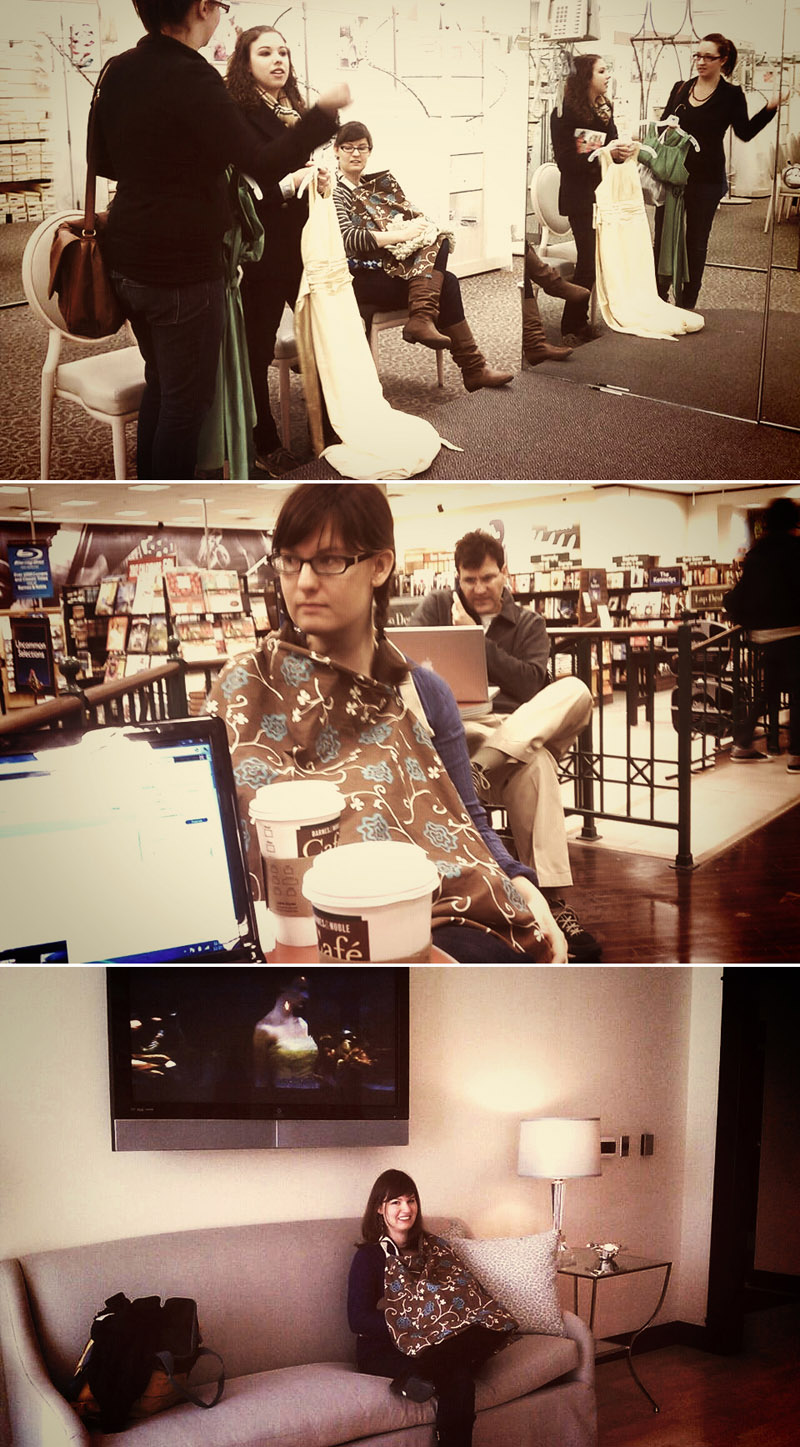 3 Replies to “Wednesday by Leah: Nursing In Public”