If you are a sleep-deprived parent, please don’t read this blog post!

Everyone else – I am happy to report that I’m getting a decent amount of sleep! Which is probably the biggest surprise of this parenting adventure for me. I didn’t expect to be getting as much sleep as I do, but Jonah is a super easy baby – he wakes up generally once or twice to nurse for 5 minutes and then falls back to sleep. He’s been doing that for the past 3 weeks. Before then, he was still nursing every two hours, and peeing and pooping about as often. But as he’s grown, he’s started going longer between feedings in the evening and he also doesn’t pee or poop quite so often. Which means more sleep for both of us! 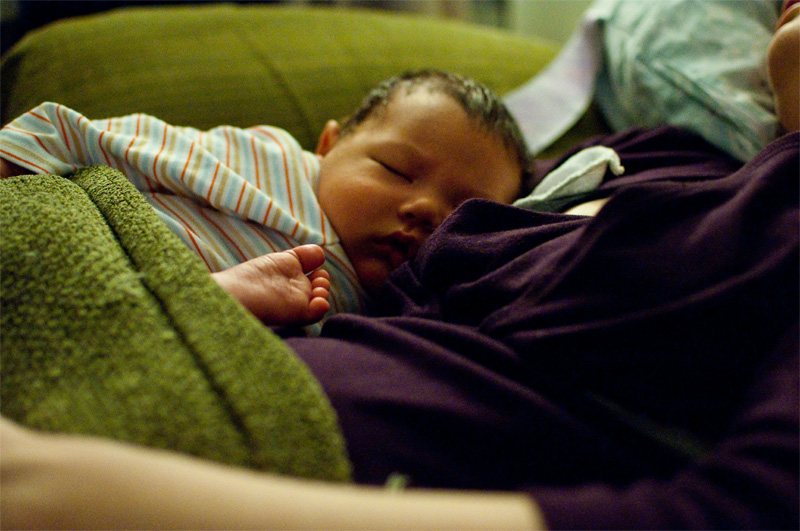 Before Jonah came, I thought we’d use the Arm’s Reach co-sleeper from the get-go. It’s set up right next to our bed, so Jonah can be close by. But then Jonah arrived and he was so tiny and precious, and nursing so often, that he ended up just sleeping on my chest. Even the co-sleeper was too far away – when I would put him in it, I couldn’t sleep. I would just watch him and make sure he was breathing. On my chest, I knew he was breathing because I could feel him. I would prop myself up with pillows, and could nurse him easily throughout the night. And that’s how we slept at first. No, it is NOT the recommended way to sleep. But even the slightest movement from him would wake me up, so I wasn’t worried about his safety – if anything, I felt like he was more safe with me than lying in a bassinet, because I could keep him warm and make sure he was breathing.

Now that he’s sleeping for longer stretches, he sleeps beside me. Still not in the co-sleeper, but I think sometime between 3 and 6 months we’ll transition him over there, and then between 6 and 12 months we’ll transition him to his room. What’s worked great for me and Mark is for me to sleep on my own for a few hours in the earlier part of the evening, while Mark hangs out with Jonah. Then I wake up for a snack (breastfeeding makes me more hungry than pregnancy did!!!), and I take Jonah while Mark’s goes to sleep. Jonah nurses and then we both fall asleep…then he wakes up 4 hours later and nurses again, and falls right back to sleep, and Mark usually gets a full stretch of sleep – 6 to 8 hours. 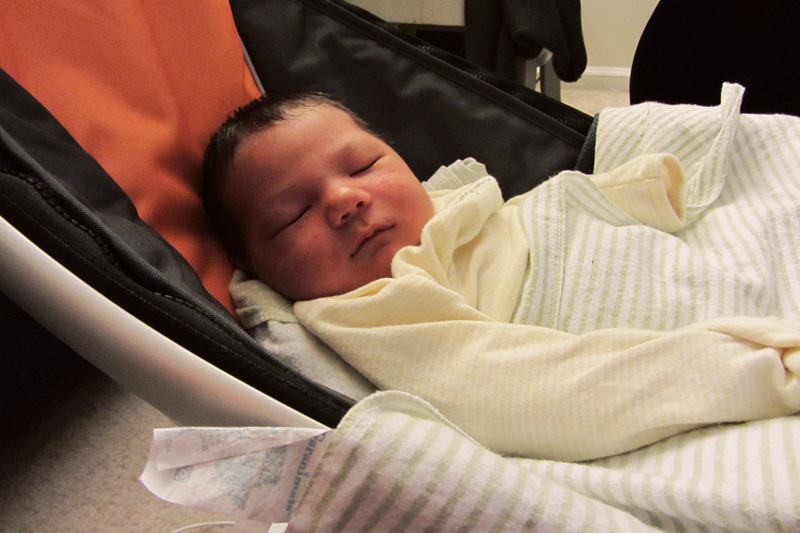 And that’s what works for us. Which is really the point of this post, other than me being really excited that Mark and I are both getting sleep, period! This is not how I pictured the whole sleep thing working out, but it most definitely is working out for us. This is not what the parenting books say to do, this is not what our pediatrician recommends, but it’s what works for us. And while I understand the concerns about co-sleeping, intuitively this feels right for us, for our family. And practically, it’s allowing us all to get a good night’s sleep. So that’s what we’re doing.

7 Replies to “Wednesday by Leah: Sleep!”