Whooo boy!  37 weeks pregnant and I’ve got my maternity belt strapped on in an attempt to relieve some of the pressure on my bladder. When you get to the point where you are deciding between dehydration, catheterization, diaper-wearing, or just never sitting down because as soon as you get settled you have to get up to pee again, it’s time for an intervention. My intervention is the maternity belt.  It looks like this: 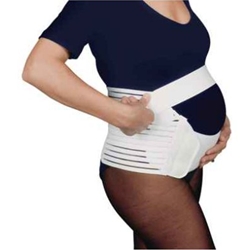 Except mine doesn’t have that top band because I bought it at a consignment sale and it was in a ziplock bag without the original packaging, so I didn’t know it was supposed to have that part. Hope it doesn’t matter too much! I do feel a difference even without that top part, so I think it’s helping.  And even if it’s not really doing anything, at least I look super sexy wearing it! Don’t be jealous.

The third trimester has been my least comfortable one. But I really can’t complain too much because even being the least comfortable, it’s not that bad. I don’t have swelling, I don’t waddle too much, I can breathe easier now that Jonah is low low low, I don’t have killer heartburn… for the most part, I feel pretty darn good! My major annoyances are a.) having to pee all the time, b.) not being able to easily get out of bed or off of our ComfySack, and c.) my increasingly sensitive sense of smell.

Y’all – I smell EVERYTHING. And each scent assails my nostrils with a grossly exaggerated potency. I’m ready to shove some tampons in my nose, especially when I have to leave the house. I think it will be a great complement to my maternity belt. I’m all about accessorizing these days!

Anyways, my olfactory superprowess forced me to beg Mark to change his deodorant brand. Mark isn’t a smelly guy, it’s the smell of the deodorant itself that was driving me bonkers.  See, Mark isn’t too particular about things that aren’t photography-related. He doesn’t need a specific brand of shampoo or a type of razor. He’s fine with mall Chinese food when I demand the real deal. So he buys whatever deodorant catches his eye, and whenever a new stick of it arrives, I have to adjust to a new smell. I tried to be cool with that but a few months ago I just couldn’t take it anymore. His deodorant du jour was NOT a smell I enjoyed or could even tolerate, so I told him he needed to switch it up. We settled on Old Spice Arctic Force. It was a smell I could live with. Domestic harmony ensued.

And then, two days ago, Mark comes home with a new smell. I wasn’t sure WHY he smelled differently – I thought maybe he just picked up a scent from someone else.  He’s been photographing lots lately, so maybe it’s the scent of a client, or their home. I tried to live with it for the evening. But I could smell it everywhere – in our kitchen, in the living room, and worst of all in the bedroom, where I need a certain atmosphere in order to sleep – dark, cool, and as scent-free as possible. So I got out of bed at 3:00 a.m. and started searching the house.  And I found the culprit: 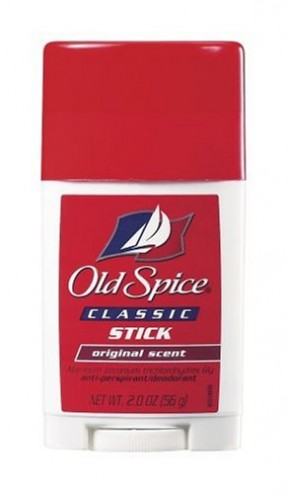 I would have to rectify this as soon as possible. So once it was a more reasonable hour, I went to the store. Breathing through my mouth, I found the deodorant aisle. Do y’all know how many different types of Old Spice there are? I don’t know either, but there were at least 20 different types at my local CVS. And not a single one of them was Old Spice Arctic Force.

I could’ve driven to another store, but I knew I would have to pee soon, so I decided I would just have to find the next-best scent and get on home. So I started taking the tops of all the deodorants and sniffing them. (The actual deodorant was still covered in plastic, ok? I wasn’t contaminating anything.) Well, of course right then another customer decides to shop in my same aisle. She turns the corner to find this hugely pregnant woman squatting (all of the Old Spices were on the lowest three shelves!) and popping off deodorant tops and smelling them.

Whatever. I was not about to abandon my mission. I had to get Mark a better deodorant STAT before he stunk up the house some more. So I just keep on with my squatting and sniffing…at one point I sort of lost my balance and toppled to the side a bit. The lady keeps staring at me. I ignore her. I had it narrowed down to two types of Old Spice at this point, and I was not going to let a little public humiliation deter me! Finally I settled on Aqua Reef.  It’s the next best thing to the Arctic Force.

In 3ish more weeks our sweet lil guy will be here! And hopefully my sense of smell with chill out and I can just enjoy sniffing his cute lil baby head instead of being the crazy deodorant-sniffing lady at the drugstore. *Fingers crossed*