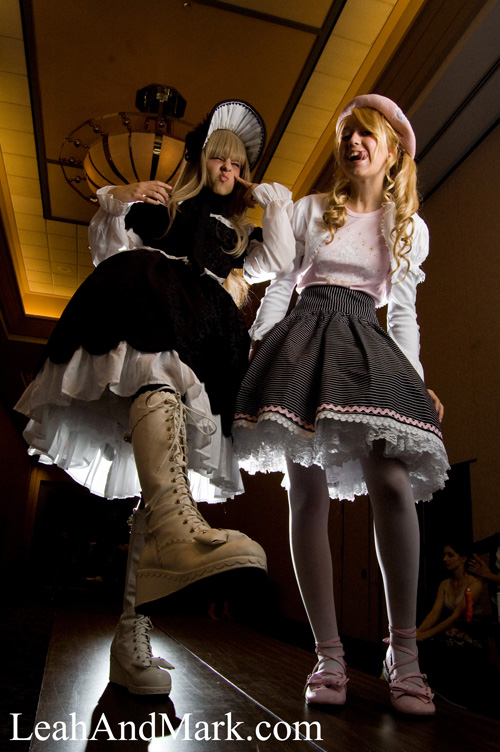 NOTE: Any MODELS from the Lolita Fashion Show – Please SEND US your email address at Email(at)LeahAndMark.com – Or LEAVE YOUR EMAIL ADDRESS in the comments section below so that I can deliver your photos to you. THANK YOU.

(Note: These are not all of the photos – but they give you an idea of how the shoot went.)

I had a really great time yesterday at Anime Weekend Atlanta 2009/ The Lolita Fashion Show. For those who don’t know, this is derived from Japanese Lolita fashion and not anything generally associated with the term ‘Lolita’ – a more generic and acceptable term would be Modern Victorian – and even then that’s not completely accurate.

One of the designers, Megan Maude had invited me to come shoot the fashion show – and then I asked if I could also set up and do a photo session with some of the models – since I can control the lighting a lot more that way. Out of the photographers that she had lined up for the show – I was the only one to show up. I’m really fortunate that the other photogs didn’t show – because then I was able to have a photo session with ALL of the models.

Since I’m apparently generally over Anime Conventions and found the hall Cosplay a little boring – I didn’t take photos of anyone else there. And there were some pretty great costumes – along with people cosplaying things that were cosplayed 10 years ago… not just from old shows – but characters that were overdone 6 years ago.

Something I’ve been working into my photo shoots lately is putting the models on a different level – usually up – and then of course sometimes I’ll get up on a ladder or chair. Once I entered the long hallway conference room where the models were getting hair, makeup, and wardrobe together – I saw the lit ceiling, and it’s two big chandeliers. Okay Look – when I arrived at the convention there were photographers everywhere – and a gabillion point and shoots. Some even had their backdrops and softboxes out. I also saw several Canon 5Ds and Pocket Wizards and some near $200 beauty dishes. There was a lot of serious gear there and the only thing I can do right now is look at my $80 ebay light kit, $30 flash triggers, my Nikon D40, and think to myself I would light that shot differently (the shots that I saw other people taking – not mine).

So at that point my main goal was to get some shots that were VERY DIFFERENT from anything anyone else was getting. 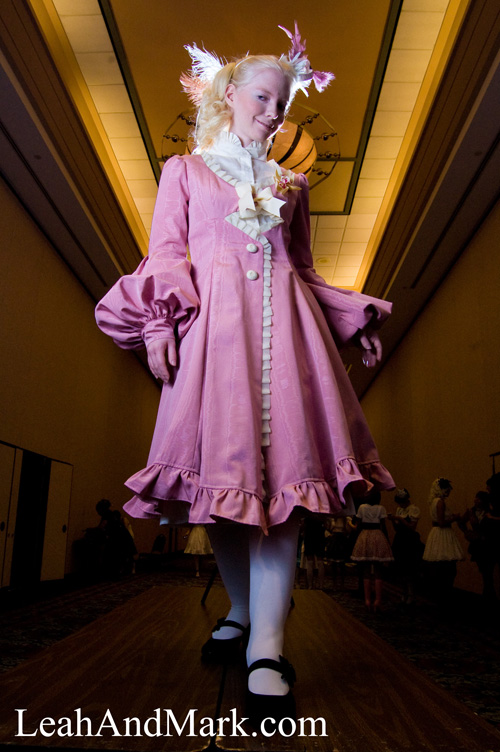 Once I saw the long lit ceiling with the chandeliers – I knew I had something. But I needed to get the models up higher so that I could have everything in the shot and at a good angle. Fortunately – the back of the room led right into the service hallway where they also housed all of their tables and chairs. I grabbed two tables and set them side by side as you can see in the photo above. Instant runway platform. Awesome. Now all I had to do was get the right settings to darken out the backgrounds and the rest of the room. If you look at the photos you can see the people in the back getting their hair and makeup done, and just standing around waiting. It wasn’t a perfect photo shoot setup – but it more than worked – and I could always fix it in post if I really wanted. The most important thing was that I was getting shots that no one else would have from the convention. Anyone can throw up an ugly muslin backdrop and start taking decent photos – but in my head I’m aiming for the shot that they’re not getting – just always trying to be different. Always.

I’m not going for anything revolutionary – just something that the other photogs at the same event, won’t have.

Now that I was getting really nice full body shots that captured the whole outfit – I went all out and decided to do headshot type stuff so I could capture the hair and makeup. Without a backdrop or a clean white wall – I had to use the convention room walls – which are foldable and usually an odd fabric texture. Whatever – it’s what I had to work with so we don’t run, we FLY with it. 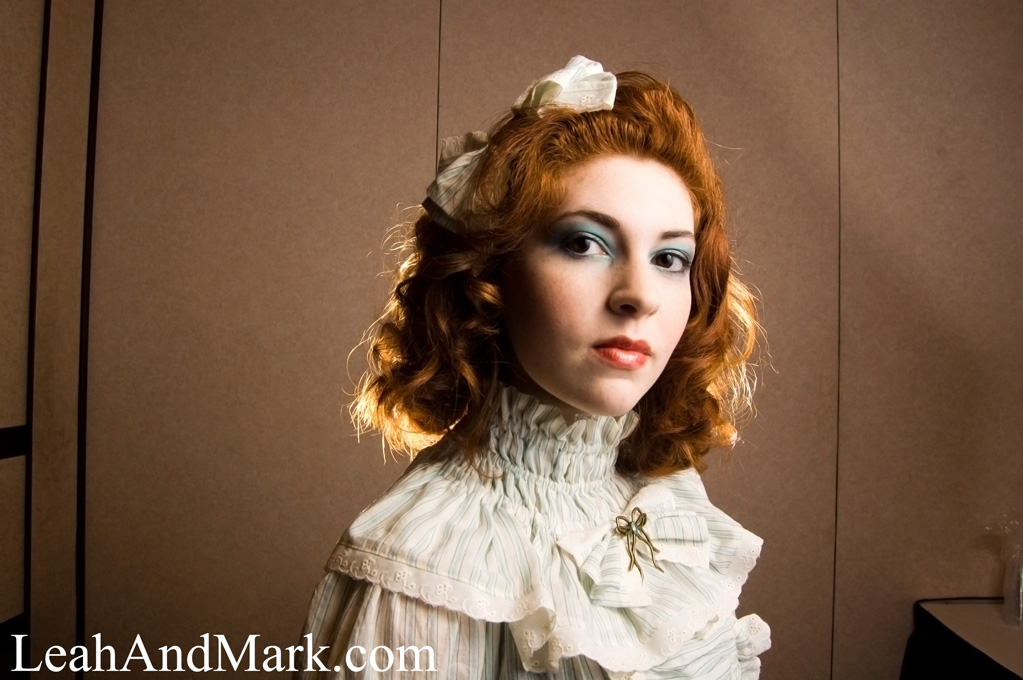 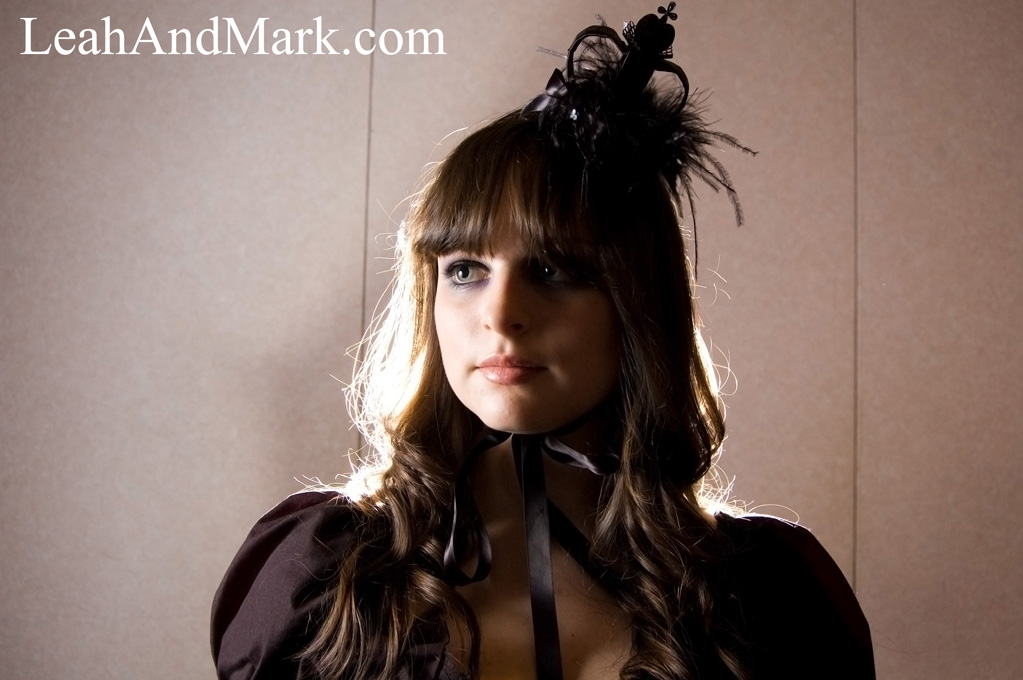 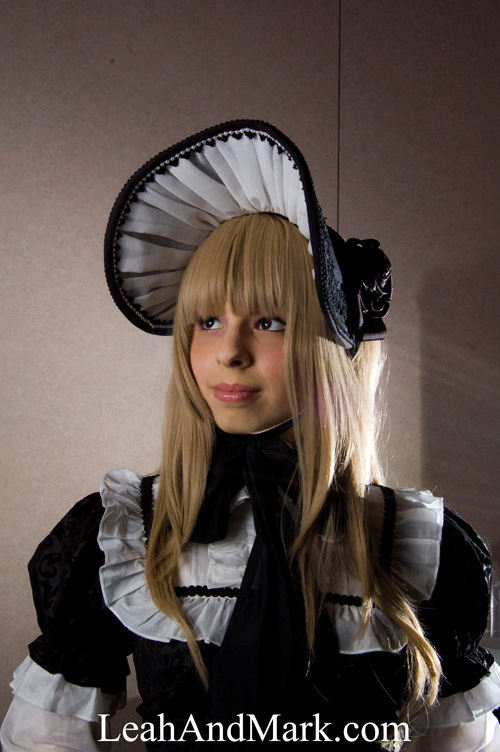 This photo here was one of the first that I shot – after I got this one my pre-shoot nerves were immediately calmed down. I was worried that I wouldn’t be able to get any detail out of their HIGHLY detailed outfits. The black kind of blends too much in the middle of the dress here – but the bonnet and face and hair and white are all there – I have others where the dress is exposed more correctly. But you know – after I get those first few shots that ‘work’ – all of a sudden something in my head clicks and aw, It’s On Like Donkey Kong. Because anyone can shoot with enough flat light so you can see the detail in the dress – but can they light it in away that actually makes it look good or even interesting?

Something else I did was move the lighting for EVERY model. Sure they’re all in the same ball  park – but the light moves from side to side and changes height. I’m not Olan Mills and this isn’t your year book photo. 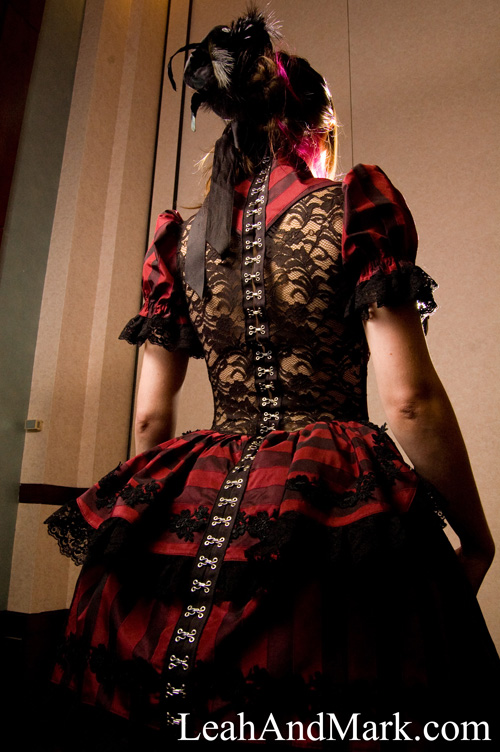 The back of this dress is… well just look at it!

Right now until my order for more radio triggers arrives – I’m just working with two off camera flashes. Although I think I would light this shot slightly differently now – what I have set up is my 285hv with a shoot-through umbrella – and then I have my even older Quantaray flash on a light stand aimed right at her face. I told her to close her eyes. But it’s kind of cool? Ha. Well – at least I got the back of the dress really well.

The last shot here is Megan Maude herself. She’s a designer based here in Atlanta and you can find her and her beautiful clothes at MeganMaude.com – she’s super nice and really easy to work with – I am very fortunate to have been given the chance to work with her and all of the other people that worked on this fashion show. Below are the links for the other designers. 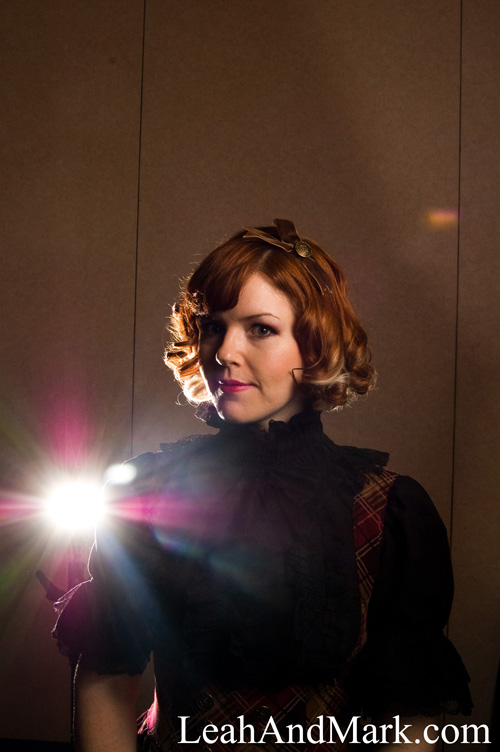