Get AutoImmune Disease Tests w/o Doctors

Back when I was in mystery-illness mode and we kept trying out different diagnosis, I ended up ordering my own autoimmune disease tests without going through a doctor. Yeah. On my own. Did you know you can do that? Well – by “autoimmune disease tests” I mean that I ordered a blood test that would confirm whether or not my body was producing the antibodies that are commonly made when you have Lupus, Sjogrens, Polymyositis, Dermatomyositis, Mixed Connective Tissue Disease, and a few others that overlap. Of course having the antibodies is just one piece of an overall diagnosis. However having that piece confirmed or ruled out can be monumental progress in determining what is going on with your body. Especially if doctors keep telling you that all the other tests are fine but you’re still in in pain, or just not feeling right – and it’s getting worse.

How do you get an autoimmune disease tests without a doctor? Well I went to a walk-up blood lab/report clinic usually used for STDS, and drug tests, specifically AnyLabTestNow. Whether you’re in a situation like I was where your insurance either sucks or you don’t have any, and seeing doctors uninsured is EXPENSIVE, nevermind also paying for their tests out of pocket; or the doctors you’re seeing WON’T run these antibody blood test because they don’t think you have anything actually wrong with you – well… this might be a good option. Again – especially if you’ve been dealing with a mystery illness that isn’t getting better, and doctors haven’t really been able to help.

So. It’s hard for me to remember the exact cost of the test since it’s been over a year, but I do remember it being in the $150-$200 range back then. So… less than an out of pocket specialist doctor’s visit. That was totally up my alley. Oh – AND there are two tests for ANA (anti-nuclear antibodies). You want to get the ANA w/Reflex test. Not the basic ANA test. The basic (and cheaper one , it’s about $85) only tells you Yes/No if you have antibodies, but doesn’t tell you which ones you have. So then you have to get the ANA w/Reflex which would have told you more info in the first place.

And honestly the person doing the blood test at the walk-up lab will probably never have come across this specific order, so you’ll want to make sure they order the RIGHT one. It’s this one from LabCorp. Many of these walk-up blood tests facilities all send their bloodwork to be processed by the same labs, and here in the South it’s LabCorp. I’m not sure what other facilities are out there or even how you find what central lab they use. I only found out cause I had previous basic blood work done and the report said it was processed by LabCorp (even though I went through AnyLabTestNow.) So then I started looking for what other tests I could have done that wasn’t on the printed ‘Menu’ that they show you when you walk up. And eventually found the ANA w/reflex blood test that I needed.

Oh – so the LabCorp Order Code as it was at the time of my test and currently posted on their website, is: 340897 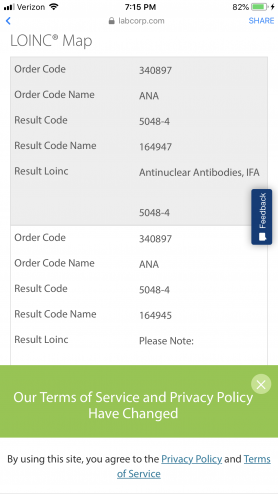 The attendant at the walk-up blood work place should be able to look it up in their system, and confirm that’s the one they’re ordering for you.

I cannot say it enough that this DOES NOT CONFIRM or RULE OUT any diagnosis for you. Sometimes your body doesn’t produce the antibodies that are commonly found with certain autoimmune conditions. This test isn’t a comprehensive antibody test. It just hits some of the most common ones that are produced when a person has one of the autoimmune diseases listed. But if like I said earlier – you’re in a situation where you’ve had a mystery illness, you suspect it may be one of the above autoimmune conditions, your health insurance/health care is challenging, and/or your doctors won’t run this test for you – then at least you always have this option of getting some autoimmune disease tests done for yourself. And then you have that information to guide you in more directions on your search for healing and healthy. It helped me a lot, partly to confirm I wasn’t crazy (at least about this), and then when my rheumatologist confirmed it with the hospitals same blood work… well, I WAS RIGHT OKAY! ha.