How to Treat & Recover from Dermatomyositis

As with many autoimmune diseases or conditions, no official dermatomyositis treatment can be called a cure. However – that doesn’t mean that you can’t turn it off. It doesn’t mean that you can’t almost completely, fully, recover. Even though there isn’t an official cure – chances are good that you will heal. You might find yourself talking with a very dour / sad / pessimistic doctor about your condition(s) – but don’t let that crush you. Sure, accept what they’re saying medically as far as treatments and next steps. But hold onto the idea that no matter what – you will heal, and overcome this and go on with your life.

There is no better time to be seriously ill than today. That’s a weird thing to say – but it’s completely true. With all of the current medical interventions, along with our growing understanding of natural supplements, AND our growing understanding of diet and food as medicine – now is the best time to be sick because you have more options and ways to get well than ever before. 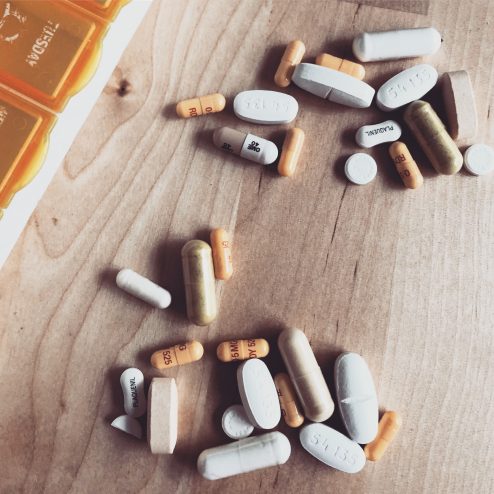 These are some of the supplements I used with my prescriptions. I would not advise anyone to go against their doctors advice. Fortunately I had a great team of doctors that gave me the medicines I need to save my life, get my body stable and to a state where I could get ‘healthy enough’ to start healing. I also believe that these supplements aided greatly in the speed of my recovery.

These are just a few of the more natural treatment supplements that I took alongside the medicines prescribed to me by my rheumatologist and pulmonary doctor. I never stopped taking my western dermatomyositis treatment medicines without my doctor’s advice – but I also continued taking my natural and holistic remedies as well. Remember – none of the prescriptions that western doctors prescribe are going to cure you from your chronic illness.

I can say that without hesitation because that’s what western doctors will say – there is no cure for your illness. Of course we know that’s often not true. Just because they don’t know of a cure for you – doesn’t mean that you can’t be cured or that you can’t find a cure. Or even better – it doesn’t mean that your body won’t heal. What it takes for you to heal will probably be different from what it takes the next person to heal. But it’s not impossible, it’s not hopeless. Keep adjusting your dermatomyositis treatment plan until you find one that works. Don’t give up. Keep going. Keep. Going.