Wednesday by Leah: Finding our Rhythm

I am not a very scheduled/routine type of person. I find routines very boring. Other than my morning coffee, there isn’t anything about my day that is routine. Sometimes I shower in the morning, sometimes at night. Sometimes at 2 pm. Some days I do yoga, other days I go swimming. I usually eat around the same times each day… not always, but generally. I do NOT like eating the same things from day to day (Mark, on the other hand, would eat the same thing for every meal for 3 months on end!). 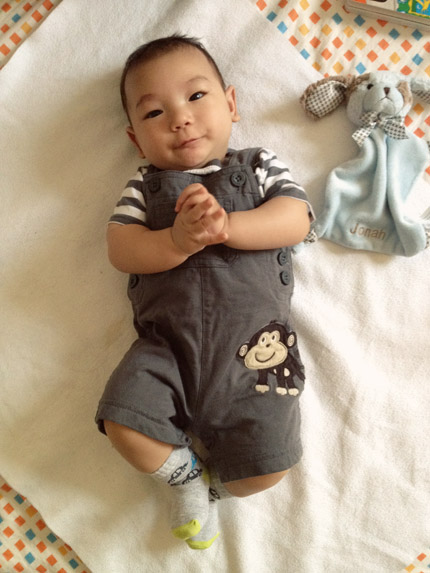 I thought once I had a baby I would magically morph into a routine-type person. I used to be a daycare teacher, after all, and we had a set schedule every day. Baby eats at these times. Baby sleeps at these times. Etc.  That’s just how you do things when you have kids, right? Except…. that is SO not how I live my life, and it was a lot harder to change than I thought. So here’s what has actually happened:

Birth – 3 months: BabyRoX sleeps most of the time. I change diapers (and usually outfits) when he’s awake. Then he eats. After he burps and/or spits up/pees everywhere, I put him in a cute new outfit, take a picture, then we have Tummy Time. Then he falls back asleep. I stare at him in a haze of love and awe until I fall asleep. I usually go out at least once per day to eat/visit with people/buy groceries/meet with clients. Rinse. Repeat. 24/7. 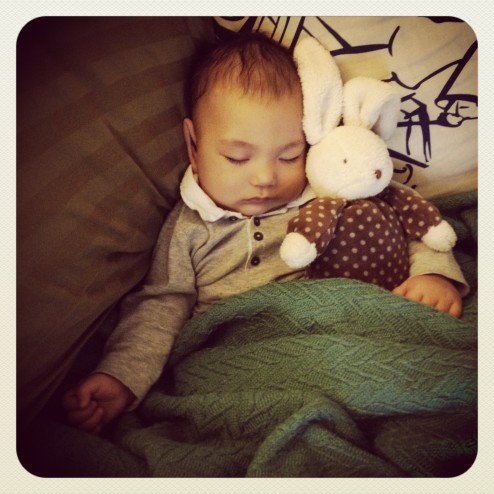 3 months – 6 months: Each month has been a little different, so it’s hard to lump them all together. BabyRoX has been napping less and less…except some days he naps more, because he was teething and didn’t sleep great the night before, or because we went swimming and he’s extra-tired, or…just because! He’s a growing boy! But from 3-4 months he was generally napping 4 times a day and nursing 2-4 times overnight, and from 5-6 months it’s been 3 naps a day and nursing 1-2 times overnight. During the day, he typically eats every 3-4 hours. It’s closer to 4 hours now that he is 6 months and we’ve also introduced some solids.

It is really important to me to make sure he’s getting adequate sleep. His brain is developing SO rapidly and he needs that sleep time to process everything he’s learning. At first I thought I needed to stay home every day to make sure he was getting his naps. But, being a very non-routine, non-homebody person, that was driving ME crazy. I didn’t want to plan my whole day around my child’s nap schedule. Plus, with our business, each day is different – some days we meet with clients for breakfast. Some days we have a midday shoot. Etc. But all the reading I was doing about sleep, daily routines, etc. was making me feel like I *HAD* to have a routine for my child or else he wouldn’t be able to develop healthy sleep habits or have a sense of stability. Then I read something about a rhythm vs. routine. That resonated with me. Routine, to me, is just too rigid. But of course I want BabyRoX to get plenty of sleep, to eat at regular times, to know that his needs will be met each day and that life isn’t SO crazy that he has no idea what to expect from day to day. And each day for me DOES have a rhythm, if not a routine. So I’ve found a pretty awesome compromise – made possible, in part, because BabyRoX is a very portable/adaptable kiddo and doesn’t need complete silence, or darkness, or anything in particular to sleep well. 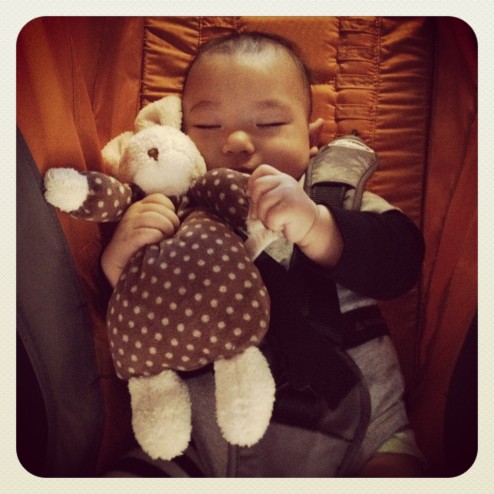 Here’s how we do things: he almost always takes a 60-minute nap about 2 hours after waking up. We wake up between 6:30 and 7:30 each day.  On the days we have to go somewhere, I get him dressed once he wakes up and potties. On the days we are staying home for the morning, I leave him in his nightgown (and usually stay in my PJs. Don’t judge!). If we are going somewhere, I bring the stroller or the Ergo carrier so that he can nap uninterrupted while I do whatever I need/want to do. I bring a little lovey for him because it acts as a sort of nap-time cue, and he likes to fall asleep holding onto something. One lovey is just a burp cloth/cloth diaper that he likes to suck on/nuzzle. It doesn’t have to be a specific animal/blanket thing. At least not for my child. When I know he’s getting sleepy, I pat his back and tell him it’s nap time, and make sure he’s comfortable. If I have the stroller, I lay him down in it with his lovey. If he’s in the carrier, I tuck the burp cloth lovey beside his cheek. He’s good about falling asleep and staying asleep even if we are somewhere noisy, but I also try not to jostle him too much or switch from a bright/noisy environment to a quiet/dark one…or vice versa. I try to keep things more or less status quo throughout the nap.

If we are at home for nap time, we read a story and I put him to bed, pat his back, and give him his lovey.

He then takes a midday nap – it used to happen around 12:30, but with the sun going down later, we’ve pushed his bedtime back from 7:30 to 8:30 pm, so nap time is now between 1:30 and 2:30. Usually this is his longest nap of the day – between 2 and 3 hours (usually 2 hours, sometimes 3 on the extra-tired days). Same rules apply for whether we are out vs. at home, but since this is a longer nap, sometimes he naps for part of it in his car seat on the way home. If I time it right during his sleep cycle, and he’s in the heavy-sleeping phase with limp limbs, I can put him in his car seat without waking him up. 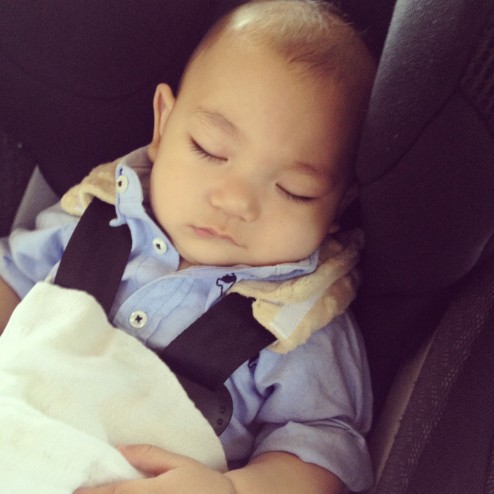 And then I follow the same routine again for his late-afternoon nap, which happens between 4:30 and 5:30. I also make a point to be home for at least one, and usually two, of his daily naps so that he gets a “quiet time” nap each day. So that’s our rhythm… eating happens after sleep. Playtime happens after eating. We have “active” playtime for the first bit, and then as it’s nearing another nap time, we transition to quiet playtime, where we read stories, sing quiet songs, cuddle, etc. If we’re out, I start patting his back and stop interacting with him as much (“Look at that! Oooh, what’s over there? Etc.). I don’t watch the clock or force him to nap if he’s not tired – and there are some days he’s just not ready for a nap at the usual time – notice how I’ve said “almost always” and “usually” throughout this whole post! 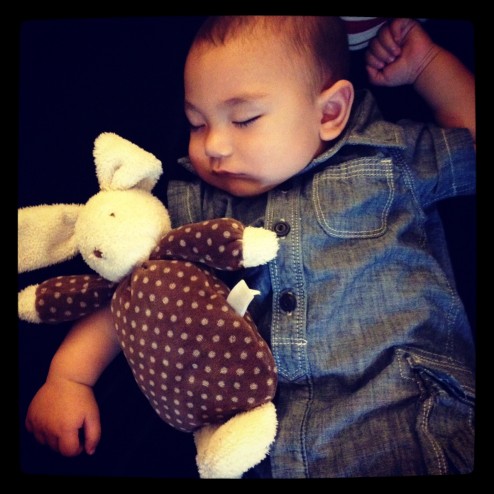 Yes, we have a rhythm and I’d say 80% of the time that’s how the day goes, but NOT ALWAYS. And that’s ok. Missing one nap isn’t going to cause my child to become cognitively impaired. And while each day IS different for us, I still make sure I am meeting my child’s needs, observing his cues, and dancing to that rhythm from day to day, so that even though our schedule changes  - or, really, doesn’t exist at all, there is a still a more or less predictable flow. One day he might be napping in the park and the next day in bed, one day we are out of the house all morning, and the next day all afternoon, but there is a flow to each day that works for us, and that flow shifts as BabyRoX changes and grows.

Of course, I also have an easy-to-transition, laid-back type of baby… if I had a child that required a predictable routine, or lots of time to transition, or the SAME sleep environment to be able to sleep, this probably wouldn’t work. But I only know my own kid and my own life, and this is how we do things around here.

If you are mostly at home with your kid(s) most days, how do things flow for YOU?

2 Replies to “Wednesday by Leah: Finding our Rhythm”