Now that BabyRoX is 6 months old, I thought I’d give y’all an update about our journey with Elimination Communication.

It’s going well, but that doesn’t mean BabyRoX doesn’t ever go in diapers. He would probably use the potty a good bit more if I was willing to take him all the time, but I quickly realized that I was not a fan of pottying him at night – it interrupted my sleep too much. Some nights he stays dry, but he’s been growing – and thus nursing – a lot lately so he’s been going more at night. It’s way easier to put him in a super absorbent diaper and change it once than take him to the potty a few times. So we don’t do EC at night. We’re good about practicing EC when we’re at home, and BabyRoX still signals fairly regularly that he needs to go, although now that he’s crawling/scooting around, sometimes he tells me right as he is going or just after he’s gone, rather than giving me a minute’s heads up like he used to. I’ve been told to expect more misses as he gets more engaged in exploring the world.

I’ve started signing the word for “potty” each time I say it and take him to the potty, so hopefully in a few months he’ll be able to sign when he needs to go. For now he just gets squirmy and a little fussy and I take him. I plan to move more towards taking him to the potty at specific times throughout the day rather than waiting for his signal as he gets even more mobile – and then of course taking him when he signals, as well. 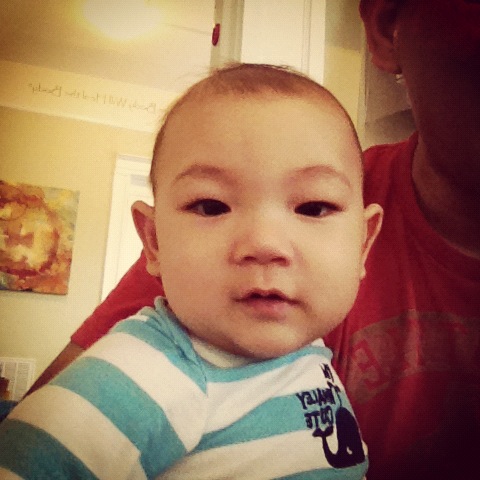 On days we are out and about, I rely on diapers. (My fave diapers are FuzziBunz, by the way! So soft and cute and easy to use!) It’s hard to potty him when we’re in the middle of running errands, especially if I’m shopping or making a bank run or whatever I happen to be doing. And then when we’re out visiting people, I’m not always aware when he signals because I’m chatting with someone else or the grandparents are holding him and I don’t know that he needs to go. So we’re pretty part-time with the EC for now, but we’re still definitely doing it and BabyRoX still goes on his potty at least 3-4 times a day even on the crazy/busy/lazy days.

In case you’re wondering the “tools” we use… We have 2 potties in the house and one travel one for the car. We love the Baby Bjorn Potty Chair because it has a high back and is sturdy and easy to clean. We also have the My Carry Potty for the car because it seals up good’n’tight in case we’re not somewhere we can easily dispose of the contents. I really haven’t used the travel one much, because if BabyRoX needs to go while we’re out and about, it’s usually while I’m driving, so I tell him to go in his diaper and then I change him when we get to our destination. But it’s nice to have just in case, and especially for when he’s older and transitioning out of diapers – I like that he’ll already be familiar with the travel potty. We primarily use the FuzziBunz for diapers now, and I just got some Bumboo ones for overnight (we had been using disposables overnight previously). If it’s been a few days of craziness and BabyRoX hasn’t been signaling, I’ll switch back to the prefold diapers with covers because they are less absorbent and he feels it more when he wets, and then he starts signaling again. 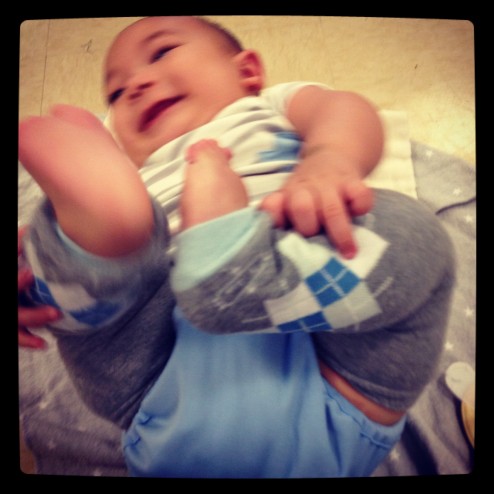 Am I glad we’re doing EC, even if it’s only part time? YES, definitely! I think it’s important to help BabyRoX maintain an awareness of his bodily functions and feel comfortable using a toilet for his elimination. I think it will make the true potty training phase easier, because he will already be aware of the sensation of needing to go, and aware of where it is appropriate to go to the bathroom. I also understand his cries and gestures much better, because I’ve been paying such close attention to deciphering them. I know when he’s hungry or tired or gassy or needs to go to the bathroom, and I can respond to those needs accordingly. BabyRoX hasn’t had a diaper rash since he was 2 months old, and I think that is in large part because we practice EC. Even when he does go in his diaper, he lets me know right away and I change him, so he never has to be in a dirty diaper for very long. I’m a fan of EC. Yes, it takes work, but to me it is totally worth it!