{photos and text by +jo}

I bet you thought you weren’t going to get an update on what I’ve been up to over at Magnolia Pregnancy Resources?

So all the prep work is completed. Now to the part that really matters. The painting. I figured I’d take you through a semi-step-by-step tutorial of my thought process when doing this stuff.

Clean up – set up. A drop cloth is so important because I’m messy. I wear the same two pants when working on this because they are going to be covered in paint by the end of it all.

Prepping and mixing the paint. Paint separates easily. Especially water based latex paints. Rebecca was awesome enough to buy the good stuff too. It only takes one coat to cover any other color. That’s great and could complicate things down the road… we will see. Because there is more than one layer to the hills/mountains I wanted to have a sense of atmospheric perspective when painting them. So I decided to do washes of color to build up the paint from the basic blue of everything. {That’s why I repainted the wall blue.} So, take the paint – add the solvent of the pain {water in this instance.} Mix well.

And if you get any one you – wipe it on the wall. At least at this stage it’s okay to do this… later… the pants.

And start building the layers of color.

It was dripping and I wasn’t too concerned about it. It would be covered up in the layers below. Also, in this phase I could fix things I wasn’t happy with on the fly.

Also, don’t forget to take off ALL of the plate covers and tape over the holes. Don’t need the paint getting into and onto things that wouldn’t like it.

Adding in more paint to create the next layer. The 2nd row of hills received two coats of watered down paint. The top layer just one coat of water down paint.

The bottom row had the full color straight from the can applied. It was at this point I realized – that paint really covers like they said it would. There wasn’t as much of a difference as I was hoping. The more it dried, the more the green covered the blue. Rebecca certainly got her monies worth from the paint. Wow – it’s good stuff.

I didn’t let the paint slow me down any. I have plenty of tricks up my sleeve to create the look of atmospheric perspective. Keep on painting.

Until you sling it all over the place. Oops. Wipe if off…

and onto the wall and/or pants.

Whew! First section of wall down! Make sure there’s no paint on your shoes before you step off the drop cloth. I was lucky this time – no paint.

So, keep painting the layers as planned. Can’t really switch of the game plan mid-play. Otherwise something would look off later on down the road.

Don’t for get the window and the details. Add the second coat.

Fill in the rest. 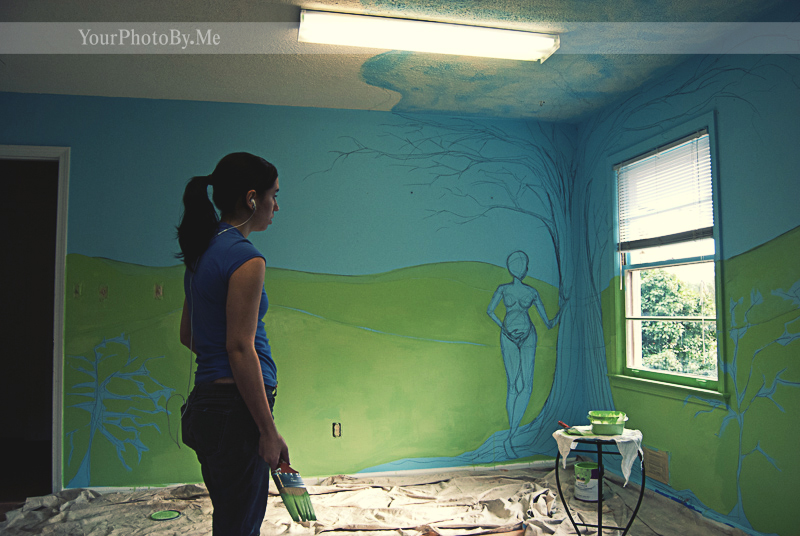 Boom! Grass, hills, and mountains’ base layer is done.

Now to move onto the tree and bushes.